The outer ballistic shell is comprised of an enhanced Kevlar composite structure which maintains the same Weight specifications as the standard CVC shell.

For use by armored vehicle crews with the M-138/G microphone and MK-1697/G headset unitized in a comfortable, adjustable liner. A three position switch allows radio, intercom, and listen-in only modes. 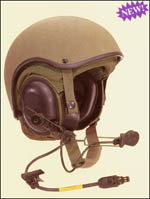 The United States Department of Defense recognizes our PASGT vest as the best body armor available for protection from exploding shrapnel and fragmentation.

Constructed of Kevlar high strength fibers, studies from Vietnam conclude that casualties could have been reduced 40% if every soldier wore a PASGT helmet and vest.

This lightweight design allows great mobility and versatility. In addition, the Kevlar material offer unprecedent heat and flame resistance. Thermal condutivity is lower than asbestos; the vest will not melt or support combustion. 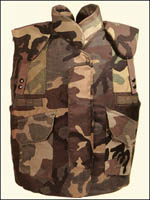 All Worldwide current production and surplus not exceeding 132mm. High velocity 40 mm ammunition must not be used in this launcher.

Give your forces the advantage of higly accurate 40 mm firepower. Now any combat rifle can be easily equipped with this advanced, patented grenade launcher system.

The Combat proven M-203PI Grenade Launcher with a quick connect system that allows the M-203PI to be snapped on or off a rifle as easily as changing magazines. A Mounting interbar is attached to the rifle within the handguard which does not affect rifle operation.

The M-203PI launcher can be moved between a rifle and a pistol unit which allows it to be carried compactly and used without a rifle.

The Launcher can be moved between a rifle and a pistol unit quickly and easily.